The search for extraterrestrial intelligence; SETI

The search for extraterrestrial intelligence (SETI) captures the imagination of many. Most of us are fascinated by the prospect of communicating with an alien from a far distant star system. Countless hours and a lot of money have gone into the SETI program but the lack of success is remarkable. An honest consideration of this fact leads to only one sobering conclusion; humanity gets super-ethical, or it becomes extinct!

In 1960 Frank Drake proposed an equation to estimate the number of civilizations with whom we could communicate in our milky way galaxy. The Drake equation considers everything that could possibly affect our chances of successful communication and takes the form;

The first 5 terms in the Drake equation are an estimate of the number of planets with life on them intelligent enough to communicate with us which is a number we can guess at but cannot change. What is absolutely clear is that the first 3 terms result in an incomprehensibly large number of planets where life similar to what we have on earth could exist.

This leads us to ask if we would put life on these planets if we got there and found them to be lifeless. I think we would because we come from a planet where life spreads to every remote corner it can possibly reach. We can only assume that intelligent aliens would do that too. Having put life on a planet it seems logical that the civilization that put it there would supervise it and ensure that it developed well and became a suitable home for more intelligent life.

The Fermi paradox is the apparent contradiction between the estimated billions of planets with extraterrestrial civilizations and the lack of evidence for, or contact with, such civilizations.

According to the Zoo hypothesis, aliens would generally avoid making their presence known to humanity, or avoid exerting an influence on human development, somewhat akin to zoo keepers observing animals in a zoo. But if there are billions of aliens watching us why are none breaking the zoo keepers' code and making contact? There are many who claim contact has been made but I am talking about official undeniable contact here. To make so many aliens obey this code of conduct so well there must be a rule, or law, in force that is so strong that we have no comparison in our legal systems. The only unbreakable laws we know of are the laws of nature. I propose that there is such a law and that it is called "The Law of Free Will". Until enough of us ask for contact from friendly aliens they will stay strictly outside the realm of our senses.

The final term in the Drake equation deserves close attention and honest consideration. How long do civilizations in our galaxy remain in a state where they can communicate with other star systems? The answer might well be, "a very short time indeed". If we take a big-picture look at our own global civilization we can see why. We recently came out of a decades long cold war where newspapers frequently carried stories of the danger of a nuclear holocaust where mutual assured destruction was like a huge black cloud just waiting to descend upon us. The nuclear threat has decreased somewhat, but it is still there because of new players in the game. Also, a whole range of new threats have risen up to fill us with fear. Global warming, the danger of an asteroid impact, financial collapse, incurable new diseases like a mutant version of AIDS, CJD or bird flue, and so on, are now waiting to finish us off. It seems totally clear to me that there are 2 choices. Either humanity gets wiped out as a failed branch of the evolutionary tree (Darwinism carried to its logical conclusion) or we learn to totally respect the law of Free Will and other similar laws of nature like the law of balance of action (karma).

Summing up the above; there are just 3 alternatives for the lack of success of SETI.

The picture at the top of the page was taken by the Hubble telescope and it covers one thirteen-millionth of the total area of the sky. It shows about 10 000 galaxies each containing billions of stars. The picture below is a more detailed view of a part of this ultra deep field image. The image has also been translated into a film to give a 3D perspective which helps convey the staggering significance of this image. See www.flixxy.com/hubble-ultra-deep-field-3d.htm. With so many stars in our cosmos it is impossibly unlikely that our Earth is the only planet capable of sustaining intelligent life. The chances of such life only forming on earth are also incredibly unlikely so it leaves us with only possibilities 2 and 3. 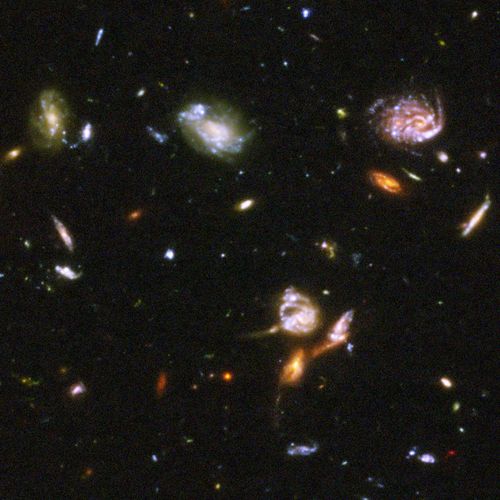 The SETI results clearly show that humanity wiping itself out is a possibility that needs to be taken very seriously and there are examples much closer to home illustrating how this could happen. One is Easter Island which shows just how blind a culture can become if it does not wake up to the dangers in time. The Easter Islanders were so busy building their statues (moai) that they disregarded the fact that they were destroying all their trees in the process. Without trees they could not build canoes to catch fish. Without fish they destroyed all other food sources on the island. Without boats they could not escape when the food ran out. The story is so similar to what we are doing to the whole planet today it makes any sane person really concerned. Advanced technology has given us the power to destroy all our forests and we do not yet have the spaceships capable of taking us to another planet when we have depleted this one of its food supply. However, another very remote South Pacific Island is an excellent example of how it could be. Anuta has a population that lives in harmony and cooperation and because of this they have a stable and happy population who look after their island's resources. www.bbc.co.uk/tribe/tribes/anuta/index.shtml Harmony, cooperation, mutual respect, and most importantly, honesty are the keys to long-term success.

Places like Anuta help convince me that humanity is actually capable of becoming the super-ethical race it needs to be to survive into the distant future, but I am concerned that the transition from where we are today will be very difficult.

Since option 2 is what I am trusting is true it is worth examining it in more detail. Presumably life evolves at different rates on different planets so the fastest evolving planet could get life intelligent enough for interplanetary travel millions of years before any other planet. The beings in their spaceships would travel from their home (planet 1) and assess what they find at planet 2 and decide whether or not to put life on it. If there was intelligent life there already, but not up to their level, they would have a few choices. They could leave it alone. They could wipe it out. They could put some of their race on planet 2 to live with the life-forms already there. Because planet 2 would have different conditions to their native planet 1 they would have to do some genetic engineering on their own race in order to thrive on their new home. Using their experience with planet 2 they could then go on and visit other planets. Obviously they would start with planets in their own star system if there were suitable planets in it. Having got a taste for space travel within their own system it is more than likely that they would soon (in geological time) start travelling to other star systems. If we consider the time scales available for the process to develop it is clear that there is time for life on just one planet to spread its influence to every other planet in an entire galaxy. Maybe we are planet 1 but the chances are so tiny it is not worth considering seriously. It is far more likely that aliens, way more advanced than us, are watching and waiting.

Waiting for what? Waiting to see if our genome is fit for purpose maybe? I can just imagine them tuning into our TV broadcasts and watching with disappointment all the violent trash that is pushed out. The typical science fiction film depicts alien invading armies, continuous fighting and a culture of abuse with zero understanding of the law of free will. Aliens with civilizations millions of years more advanced than ours could do whatever they liked with us. The fact that they stay hidden from the conscious awareness of most of us is a very important point to contemplate. Why would any intelligent alien help a bunch of vicious louts, as depicted in so many of our films, get into space and spread such a sick culture? Are we going to make the effort to evolve our culture to a level where they can accept us into society of space travellers, or are we going to be allowed to perish as a result of our own intransigence?

The first step to avoid termination is to recognise that it is not anyone else's responsibility except our own. We cannot make others change; they have Free Will. We can only lead by example. Having realised that it is a group effort the next step is to learn the importance of the truth. Things in our lives are the way they are, and ultimately we either face up to truth of our situation as it is in the present moment, or we suffer. Becoming more honest and developing integrity takes a lot of work but the rewards are great. It is incredibly easy to lie to ourselves and others when we see so many examples around us. Lying is a habit and it takes time and commitment to release old bad habits. It is a hugely liberating feeling to know that if anyone is angry with us it can only be due to a mistake because we know that we have never knowingly deceived them. The problem will be caused by a misunderstanding on someone's part so the issue can be quickly cleared up by clearing up the misunderstanding. The more integrity we have the less fear we carry with us. What a liberation!

The next essay in the series is about a better way to raise tax - a limited resources tax.

One of things I really appreciate about Cambridge is the chance to listen to and meet people who have accumulated huge knowledge of their chosen subject.  Duncan Lunan of www.astronomersofthefuture.net has had a life-long passion for astronomy, space flight and the search for aliens.

Jan. 2012 he gave his '“Man and the Stars” - The Fermi Paradox' talk and spent much of it examining the possible technologies for inter-stellar travel. He also talked about the recent stunning progress in finding planets around stars. It used to be argued that double stars could not have planets, but they have now been found - days before his talk.

I put to him the conclusion I come to in this article:- mankind has to get super-ethical or it will be allowed to perish. He nodded silently. What more is there to say! Anyone who looks at the evidence honestly with an open mind has to come to this conclusion. The challenge is spreading the message.