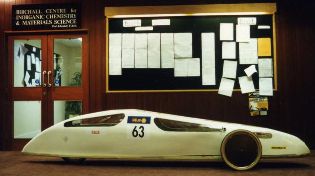 After 2 years of compulsory national service (in the police) I trained as a Chemical Engineer at the University of Cape Town. In 1988 I moved to the UK and obtained my PhD on the subject of exhaust gas sensors made from solid electrolytes.

My next move was to Keele University to work for Kevin doing solid oxide fuel cell (SOFC) development. The first few years were some of the happiest of my life. I had the job I had dreamed about for years, a beautiful campus to work on and a special new partner. From the mid 70s to the early 90s my career was guided by the belief that fuel cells would make the biggest contribution to a pollution free future world. It became obvious to me that a SOFC powered car could break the world fuel consumption record and I obtained the funds to make an attempt. (It is still a very real possibility.) Photo above. The end of the first funding round was bedevilled by a whole set of really strange problems. This led me to take advice from a remarkable man I had recently met; Andrew. Among other things he helped me come to the realisation that our pollution and other problems would not be solved by fuel cells. Comprehensive reformations of money,the economy, and humanity's ethical standards are the most important things to do first.

Another thing that happened was the tragic death of Derek Birchall who was head of our centre and Kevin's mentor. (You can just see his name on the sign in the above photo). I decided not to pursue further funding for the SOFC car and went to work for Derek Fray in Cambridge. My first project with him was a system to produce sodium on demand by electrochemical pumping.

The 3 academics I mentioned above are all fellows of the Royal Society which is the second highest accolade in science after the Nobel prize. I mention this because it is a huge privilege to work with such people and you learn things from them that just cannot be taught with words alone.

Another great privilege I have had is to spend significant time with 3 people who claim to be spiritually enlightened. These people say things that really take you aback. You stop and think, "What!". However, after a period of letting their words slowly sink in you realise that they have revealed an important truth. It is them who have given me the confidence to marry science and spiritualism on my website. If we find the ultimate truth there can be no separation or conflict between religion and science.

For a long while after receiving Andrew's advice I was in a state of having no clear idea about how to fix pollution. I shared the opinion of many that clean energy technology was too expensive and intrusive to make a big impact on the rate at which we pump carbon dioxide into the atmosphere. On the 29th December 2007 I had a major revelation about how the danger of global climate warming could be averted using simple extensions of modern technology. My doubts were blown away and I now know for certain that the ability to generate all the energy we need, without pollution, could be just around the corner. If we would just take the relatively easy step of turning that corner we would soon have a better world with ample clean energy for everyone at a price lower than we pay today. With this website I hope to convince you of the truth of this and maybe encourage you to join me on the clean energy path.